Erica Anderson is among those who have made the move from tech giant to innovative publisher. At DIS 2020 Erica will talk about how to build new media brands and products across multiple, inter-connected channels. 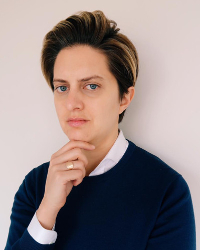 One of the big concerns that publishers have had in recent years is keeping staff away from the lure of the big tech platforms. Yet, for a number of reasons, there does appear now to be a trend of talent heading in the opposite direction

Erica Anderson is among those who have made the move from tech giant to innovative publisher. After working for Google and Twitter, she is now Executive Producer, Vox Media charged with managing the content ecosystem of the company's high profile journalist, Kara Swisher.

At DIS 2020 Erica will talk about how to build new media brands and products across multiple, inter-connected channels. Here she discusses her journey to Vox and gives an insight into why Vox’s podcast strategy has been so successful.

Tell us a bit about your journey to Vox Media? You have worked a lot of your life for platforms (Google, Twitter) what prompted you to move to Vox?

I spent eight years inside of big tech, starting with Twitter (2010-15) and Google (2016-2019). I had a unique view into nearly every global newsroom – legacy, digital, and across every medium. When I knew it was time to return to media and leverage what I used during this residency, I found myself intrigued by Vox's ability to experiment, successfully, with new platforms, primarily podcasts and streaming television. I thought to myself –– this is a place that has figured out how to take a new medium and develop profitable, creative, industry-leading products. There is something here.

What would you say are the key learnings you took from your time with platforms, especially Google News Lab?

I learned an enormous amount about how to function as an employee in the new digital economy. Most importantly the most effective teams are flat, and the most important skill is building and leveraging soft power. I also learned that cross-functional work is essential to making broad, sweeping changes (that tech companies, as they become more established need) to continually disrupt. So for that, I learned how to connect with and speak the language of experts across the companies from legal to engineering to user design.

And what does your day to day role at Vox look like? You work specifically for respected tech journalist Kara Swisher - what does that specifically entail?

I oversee and run Kara's editorial ecosystem, which includes her two award-winning podcasts,Recode Decode andPivot with Kara Swisher and Scott Galloway and herCode Conference. (Code is a seventeen-year running, exclusive event for the world's most powerful tech executives and venture capitalists to explain their ideas and be grilled by Swisher. ) We put out five podcasts a week (three for Decode, two for Pivot) which means I work closely with the producers, guide them on story selection and angle, sit in on recordings and provide feedback to the hosts. When it comes to Code, I support Kara in all of the programming efforts. This year, I am leading the Day 3 programming, which will be focused on the future of death.

While there could be a lot of meetings in this role, I work hard to preserve time to be creative – which includes talking to people about new ideas, reading and thinking.

Which do you think Vox’s podcast strategy has been so effective?

One of the reasons Vox's strategy has been effective is because they let two people – Kara Swisher and Ezra Klein – create podcasts when it was an unpopular activity.  They provided them with an opportunity to play with the new medium, find an early audience and build loyalty. When it became clear this was a huge area of opportunity, Vox quickly scaled up infrastructure and editorial teams to support new and emerging podcasts. The network is also a critical reason for the success –– having new hosts on already-popular podcasts within the network is a nice way to introduce audiences to new shows.

There are so many podcasts competing for listener attention. How do you ensure that Kara’s output stands out?

Kara has a unique voice and a totally original interview style. It might be that a dozen people have already interviewed a big candidate or tech CEO, but Kara's is often the only one you need to listen to. She is not afraid to push back, point out when the interviewee is avoiding facts and go toe to toe with when an answer is unsatisfying. It turns out, executives at the top of their games appreciate this, which is why they continue to come onto her show.

Aside from the big names, Kara also has the rare ability to find the person with the next big idea – likeShoshana Zuboffon surveillance capitalism. If you are along for the ride with Kara, you are going to learn something new all the time.